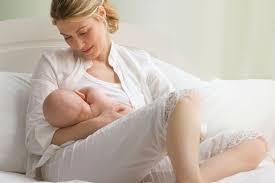 Principal remedies for mastitis in breastfeeding.

For inflammation follows an injury to the breast. Patients feel sore, bruised, and achy. There is fear to have the part touched.

Sudden onset with rapidly rising fever. The breast is hot to touch, engorged, swollen, congested – red, hot breast. Throbbing pain in the breasts. The pain is worse from jarring. The right side is more often affected.

Begins often with general chills and fever, stitching pains in the breast and headache. The breast feels hard and stony with stitching, needle-like pains. Any movement aggravates the pain. The patient likes a snug bra. Breast feeding is quite painful. The patient will be quite irritable. Very frequently the patient will experience dizziness or faintness on rising from bed. There is strong thirst and not infrequently constipation.

Excruciating pain in the nipple which extends straight through to the back (at the level of the shoulder blade) with each suck of the baby. The breasts are very inflamed, swollen, and hard. The nipples may crack.

Breasts are very prone to abscess. Extreme sensitivity to the least touch; mothers can’t stand for the baby to nurse. Complaints are worse from cold and exposure to the least draft, and better from warmth.

Hypersensitivity to even the slightest touch of clothing on the breasts; jarring also aggravates.

Fever, chills, and perspiration without relief; a profuse sweat with a drop in fever; but no subsequent improvement; the patient alternates between hot and cold, uncovering and covering.

The most common remedy (covers about 50% of mastitis cases. Breasts become lumpy, with hard knots or nodules, the nipples cake. Sore, fissured nipples. Intense pain in the breast as soon as the baby takes hold of the nipple. The pain often extends to the underarm or it can radiate over the whole body. Favors the right breast. Damp heat relieves, such as local poultices. Some patients may have flu-like symptoms as well. Here Miranda Castro gives a case of Phytolacca in mastitis

For an accurate, individualised remedy, patients should consult with a qualified homeopath. This increases the likelihood of matching an individual with a remedy that will work for them. A remedy that does not match the symptoms of an individual’s illness will not work!

There is a significant and growing amount of scientific evidence confirming that homeopathy is a safe and effective medical therapy. However, this evidence remains only the third most important proof of this.

The most important proof for the safety and effectiveness of homeopathy is clinical experience, that is the many millions of patients who, having suffered serious illness, have been treated successfully with homeopathy. This is going on throughout the world, and been doing so for over 200 years.

Homeopathy has also developed a voluminous materia medica. This contains the intricate details of the healing properties of several thousand substances used to make homeopathic remedies. The short remedy pictures above are just a tiny part of this knowledge.

Varshney JP, Naresh R. Evaluation of a homeopathic complex in the clinical management of udder diseases of riverine buffaloes. Homeopathy. 2004,. 93, 1, 17-20.

Indian researchers involved in this trial developed a homeopathic complex against mastitis and tested it, without placebo controls, with 102 riverine buffaloes suffering from various levels of mastitis. The treatment was deemed to be 80 to 97% effective against the disease, depending on the severity of the condition.

Klocke P, et al. A randomized controlled trial to compare the use of homeopathy and internal Teat Sealers for the prevention of mastitis in organically farmed dairy cows during the dry period and 100 days post-calving. Homeopathy. 2010, 99, 2, 90-8.

Mastitis in organically farmed dairy cows is a major issue since, by definition, organically farmed animals cannot be given antibiotics. To deal with this, Swiss scientists from the Research Institute of Organic Agriculture in Frick sought to come up with a solution using a herd specific homeopathic mixture in cows affected by mastitis. 102 cows were randomly assigned to receive teat sealing via Orbeseal, a sterile, non-antibiotic inflammatory infusion in the form of a viscous paste, the homeopathic mixture or no treatment. All cows were checked for clinical mastitis and somatic cell count for the first 100 days post-calving (milk from cows infected with mastitis generally have higher total bacteria counts and somatic cell counts than milk from uninfected cows). On analysis it was shown that the herd-specific homeopathic was effective in increasing the number of animals with normal milk secretion compared to untreated controls.

French researchers in this study set out to assess the effects of a topical homeopathic combination product containing Belladonna 1X, Calendula mother tincture, Echinacea 1X and Dulcamara 1C, on mastitis in dairy cows. Data from 31 cows with udder quarters identified as being inflamed by an automated milking system (AMS) was assessed to evaluate the effect of the product on selected parameters of mammary inflammation. Inflamed quarters were identified when milk quality started to deteriorate, via an alert generated by the AMS, on the basis of electrical conductivity (EC). Milk yield and EC were retrieved five to seven days prior to the AMS alert, on the day of the alert, and for the following seven days. The product was administered twice daily for two consecutive days, commencing on the day of the AMS alert. A significant reduction in EC was observed at 4-7 days following the first treatment and an increase in milk yield was also observed following the first treatment.

There is also this study

Efficacy of homeopathic and antibiotic treatment strategies in cases of mild and moderate bovine clinical mastitis.

Werner C, Sobiraj A, and Sundrum A

The University of Kassel in Germany designed a controlled clinical trial on 136 lactating cows randomly selected from 4 herds with mastitis that had a negative bacterial test result in their pre-treatment milk samples. The research used both antibiotic and placebo treatment approaches, in addition to classical homeopathy. Homeopathy was found to be as effective as antibiotics, but of course, without the side-effects, and the weakened immune system,

This material is provided for information only, and should not be construed as medical advice or instruction. Always consult with a suitably qualified and registered Homeopath, or with a medical doctor for advice about the treatment they offer, especially in serious or life threatening medical conditions, or if you are already taking medical drugs.