Louise Hogan meets the family taking the  homeopathic approach to treating their livestock. 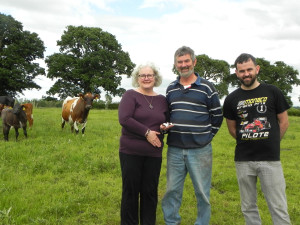 The move towards tinctures and herbs is not something that happened overnight on the Kelly farm by the shores of Lough Ennell in Co Westmeath.

Mary and Gerry Kelly, and their son Derek – who have turned their organic dairy enterprise into an organic beef and tillage farm – were first introduced to homeopathy in the 1990s when a family member was ill.

“It was 1992 and we’d a German friend staying here and he introduced us to homeopathy as a family member was ill and it opened our eyes,” says Gerry who has just entered into a farm partnership with Derek for their 53ha holding, including 16ha of rented land.

He was sceptical about homeopathy so he gave his German friend the cow on the farm suffering the worst bout of mastitis to treat, while he resorted to conventional antibiotics for other cows. However, he admits to rethinking his position after the homeopathy-treated cow recovered within a week.

In turn, the move towards organics in 2000 and using the less conventional treatments on the farm was not just a cost-saving measure, although it has reduced their spend on both dosing and vet bills over the years, but it was about a more sustainable farming life for the future.

“It was about protecting the farm for the future generations. That was my angle on it but you still have to make a living from it,” Gerry told farmers attending the Irish Organic Farmers and Growers Association (IOFGA) walk on his holding last week.

Now in her fourth year with the Irish School of Homeopathy in Dublin, Mary explains that herbs are made into a tincture with alcohol before being turned into pillules or liquid remedies.

“It is then used based on the symptoms shown by the human or animal,” she says, with a number of remedies now in frequent use on the farm.

However, Mary is keen to stress that it is a “complementary” medicine and they use it in conjunction with veterinary treatments when animals are extremely ill.

She points out that with homeopathic treatments it is not necessary to have a withdrawal period for milk and meat.

A number of remedies can treat many common conditions depending on the symptoms the animal is showing such as somatic cell count problems, infertility, calf scours, bloat and warts.

“It is not that I’m against antibiotics, but when I heard first about homeopathy the way I was told it was that our antibiotics are being overused and nine times out of 10 there is something else that can do it,” she says.

“Our antibiotics are important and have their place, our homeopathy has its place and you need to be sensible about it.”

She explains it can take time for a farmer to build up a wealth of knowledge of homeopathic remedies. “You do need some training or workshop without a shadow of a doubt, (but) even if you were able to handle warts, a cow not passing cleanings or a heifer that needs help calving, that would be a huge thing.

“If you can manage 10 things on the farm it is life changing,” she says.

Gillian Westbrook, general manager at IOFGA , said there are issues with antibiotic use.

There is still a “stigma” around the use of homeopathic remedies but “it is not hocus pocus,” she says, adding that “it is important to note these things do have chemical reactions and there is a scientific basis for why it works.”

She also explains they were keeping a close watch on the new regulations being proposed to govern the organics area, with a “one shoe fits all” type of approach raising concerns.

She says the moves to lower the thresholds for residues were very concerning.

The Kellys have had issues with rotavirus, crypto and coccidia over the years.

“We did look at vaccinating – the vet told us that we could vaccinate but it needed to be done again in six months time,” says Mary. “I think one year we lost six calves out of 25 and I started looking at homeopathy remedies then.”

She points out one of the big problems with rotavirus is not just the diarrhoea, but that it causes all the bodily fluids to pass so it causes severe dehydration.

“This year we turned to one of the homeopathic vets who can give a prescription for you to get the rotavirus nosode, or crypto nosode, or coccidia nosode,” she says, explaining they use it as a preventative measure and would often seek the advice of homeopathic vet Tom Farrington in Cork.

“So when the calves are born on the farm they are treated with the necessary remedy which is sprayed on the nose or put into the mouth. Bought in calves are treated before they are taken off the trailer and again 12 hours later.

“This was our first year to do that – it was very successful for us this year.”

However, she says they were then struck with calf scour so they sent off samples to Oldcastle laboratory in Co Meath. It showed the calves had picked up the coronavirus.

In each case it depends on the symptoms being displayed but she points out they used the coronavirus nosode and arsenicum for diarrhoea.

“We had nine calves with coronavirus and they all lived,” she says.

March to April was an intensive time on the farm. “With 44 calves you would be sweating,” admits Derek over their worries of losing animals. However, Mary cautions that people have to be sensible and call the vet if there is a sign of a major difficulty.

This year they sought the advice of their vet for a cow who was oversized for carrying one calf. She explained they discovered after the stillbirth the calf’s kidneys had not formed and it had been retaining fluid.

They then gave the cow bellis perennis for deep bruising and ignatia for grief to help recovery time. “It is not your quick fix method of giving an injection sometimes you have a little bit of work to do.

“Say you have a field of coughing calves – you’ll be putting pillules in the water and may also be spraying noses.”

Another treatment they use is sulphur, silicea and carbo veg for somatic cell count sprayed onto the cow’s nose, while they use thuja for treating warts.

Derek says over the years they have found that there is “no right or wrong” and you need to mix the homeopathy with conventional veterinary treatments.

Mary, Gerry and Derek Kelly on the family’s organic farm close to Lough Ennell in Westmeath