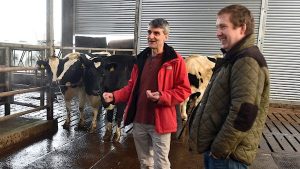 Pat Aherne could best be described as a typical, thriving, ambitious dairy farmer.

Pat is married with a young family and farms just outside Cork city, his nearest neighbour is Cork Airport.

While running a successful enterprise, Pat wants what is best for himself and his family but also for his herd, and a desire for improvement in herd well-being has taken him down the road of homeopathy.

“I had a major outbreak of mastitis eight years ago.

“I literally had 21 cases in the space of three weeks, 16 cases were being treated at the one time,” said Pat.

“I remember coming into the parlour one morning and feeling like I was going into a war against nature, and that I wasn’t winning the battle.”

Finally, Pat got on top of the outbreak, but not before vowing to never again subject his cows to the same level of antibiotic treatment.

“It was unsustainable economically, as well as taking its toll on both man and beast.”

It was then, by pure accident, that Pat happened upon homeopathic remedies as a way of treating his cattle. He started using them in 2010, and believes they helped to stabilise cell counts, reduce use of antibiotics, and speed up recovery from mastitis. The improvement was confirmed by a string of co-op milk quality awards, including an East Cork region win, one of the top six awards for supplying the best quality milk to Dairygold Co-op throughout 2016.

“With the help of homeopathy treatments, to my amazement, everything stabilised.”

In February 2012, Pat had a case of E coli mastitis on the farm, and the vet’s prognosis was not good… the cow wasn’t going to make it. But Pat, now feeling a little more confident about the use of homeopathy on the farm, followed a programme of treatment, and the cow was restored to full health.

“This was fascinating to witness, to see a cow going from death’s door and coming right back to eating grass once more. It drove my curiosity all the more into the benefits of homeopathy in all kinds of situations.”

In 2015, during an annual TB test, a nine-month old heifer on the farm suffered a fracture of a front leg. “The vet once again said that there wasn’t much hope here, we put her in a cast and then the vet, keen on homeopathy, said there was a vet in west Cork, in Rosscarbery who might be able to help, called Tom Farrington.

“I rang Tom, and luckily enough, he was heading to Cork and he promised to call when passing.

“Tom arrived, assessed the situation, he had remedies. He advised me. ‘Your animal will make a full recovery’.

“Within two months, she was back with her gang, in a slatted house for the winter and back out running around in the spring. She has now become one of the leaders of the pack.

“I was told she wouldn’t make it, and I’m firmly of the opinion that remedies had a major part to play in her recovery.”

Pat was anxious to learn more about this natural way of treating cattle.

“To get educated in homeopathy, I discovered, was not going to be easy. Unfortunately, here in Ireland, there were no course being run at that time. So I booked a course run by Homeopathy At Wellie Level [HAWL] in the UK.

“I booked my flight, and paid €1,500 for the HAWL course on the application and use of homeopathy remedies.

“I went over to the UK, and without doubt it was the best educational week of my life.”

“It was uplifting, up-skilling. It was confidence building. I came back to Tom and said this is my new plan, and this is my new situation, and that is how my dairy enterprise has run since then.

“I was told very recently by Tony Pinkus of the Ainsworth pharmacy in London that I have an exceptionally healthy herd of cows, and this is something that would really make any farmer proud.” Ainsworths specialise in traditional homeopathic remedies. In 1980, they were honoured with Royal Warrants of Appointment to HM The Queen, HM The Queen Mother and HRH The Prince of Wales as suppliers of homoeopathic remedies.

Remedies used under supervision of his homeopathic vet, Tom Farrington, include arnica after calving and AI; aconite when moving cattle (for fear); belladonna for high temperatures; caulophyllum to help with calving; and ignatia.

Tom Farrington, a vet for 30 years, lives in Rosscarbery.

He is also registered with the Department of Agriculture as a vet in homeopathy.

“I have seen homeopathy from a lot of different sides, and have practiced homeopathy across a whole variety of species,” said Tom.

“Not only cattle, but goats, horses, cats and dogs.

“My experience with the use of such treatments is that its application can have the same effect across an entire range of species.

“So that what you learn from one, you can apply to all. This is the huge advantage of homeopathy, and a great advantage if you happen to work on treatments on a mixed farm.

“I remember early on in my career standing in a bog in Kildare. It was the Bog of Allen. I had been called to a cow who was lying there in agony.

“The farmer involved said he would prefer to get her to the factory, so there was little I could do.

“As it happened, on the day she eventually came to the factory, I was the vet on duty.

“Due to the pain the cow had been in, she had wasted away. I remember saying to myself that there had to be a better way than this. It was years later that I stood with another animal, thinking there is a better way, because by then I knew I could do something. I also knew that I could have saved the previous animal a huge amount of pain, had I been able to administer a homeopathic remedy which doesn’t interfere with slaughter.”

In the early days of Tom’s conversion to homeopathy, he had a dog in his surgery suffering from a particular type of tumour.

“Back then, a conventional vet like myself would cut it out, stitch up the skin and hopefully it would go away.”

It didn’t. The tumour came back. Tom tried steroids next, he then froze it off. All unsuccessful. It was only when the grandson came in and said, “The dog hasn’t been the same since grandad died,” that Tom discovered the answer.

“I had been to human homeopathy lectures by then, where they had been talking about grief, and this wonderful remedy called ignatia. I ordered in some ignatia, gave it to the dog, and the tumour disappeared. It had been all about an expression of the dog’s grief.”

The dog returned to complete health, the farmer delighted with the outcome.

From that small animal case to a serious crisis on a major scale, Tom has witnessed powerful results from homeopathic remedies.

“I had another case, where a farmer contacted me out of the blue. He was a non-organic, conventional farmer. He rang me in desperation. His vet had suggested he contact me.

“There had been a complete collapse in fertility in the herd.

“A case of total infertility. I had to go out and see this herd for myself, because I just couldn’t get a grasp of what was going on. I looked at the animals, and they were all in perfect condition.

“I couldn’t find anything as a reason why he had absolutely zero fertility in his herd. It was baffling.”

“However, when talking to him I mentioned that that his animals were looking fantastic. He said, ‘You should have seen them six months ago, when they were suffering from copper deficiency’.”

“He said ‘Yeah, but that’s no longer a problem’. He had injected them all. He had always injected them regularly, but had stopped during the recession when everybody cut back and tried to save money.”

“Suddenly, all had the symptoms of copper deficiency once again and so they had injected the herd. The result was that cow health had improved but they failed to get pregnant.”

At that point, Tom gave them a remedy he calls Cuprum. Three weeks later, the farmer rang with the good news that everything was back on track. And by the end he had an 80% fertility rate.

“Simply put, something in the system had stopped, and the homeopathic remedies had re-ignited it.

“And when you see that result, it gives you real pleasure, particularly at that stage when all seemed lost.”

A goat arrived at his surgery with owner in tow late one night. “I thought, this is the last thing I need. A quick look and out the door with both of them. But it wasn’t to be.

“The farmer opened his mouth and ruined my evening by saying, ‘This all started with her kid dying’.”

The goat had absolutely massive over-production, and a fever of 106. She stood there with her head against the wall, the farmer having to pull her out when I needed to examine her. When I was done, she would go back against the wall.”

Tom gave her two remedies, one had her temperature back to normal within two hours.

She was no longer facing the wall, she was interacting.

The other remedy, for the excess milk, also ended in success.

While Tom Farrington mainly practices in homeopathy, he’s not adverse to use of conventional medicine.

“I’m a pragmatist, we still need conventional medicine. But there is still a place for many other forms of medicine.”